In September 2013 I recorded a reading of ‘sentence 59’ for the Bizarre Bazaar project by David Mooney.

The following description of the project is from the Opaque Melodies website, and below that is the finished piece on SoundCloud:

About 40 years ago Maxine Heller and I, with the help of assorted relatives and friends, began collecting sentences with the word “bizarre” in it. This silliness was inspired by the spoken phrase, “No one could understand our bizarre relationship,” on a Frank Zappa album, and by the Bizarre Bazaar held at a local church. We collected the sentences as source material for a graphic arts project in which the sentences would weave around, crossing each other, forming multi-sentence nodes at the common word “bizarre.” That version never materialized but it has long seemed obvious that some sort of treatment of the sentences would work as a text-based sound project. 40 years later I finally got around to it. 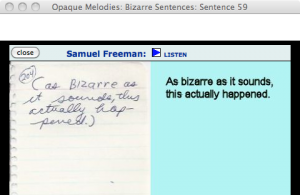 ← Some Some Unicorn
Wavemaker Stoke →