two guitars and some live patching

I spent the day at Ben’s house, recording (guitars mostly) for an album that we (and others) are (sporadically) working on. Ryan joined us in the evening, and he played some guitar parts that Ben had written.

Ryan came up with a new guitar part for a tune that I’d written a few months ago. Whilst setting up to record this I really enjoyed the way Ben and Ryan were improvising together on the riff, and it started to sound better at the slightly faster tempo they’d gone to with it. Rather than pull it back to what it was before, I moved their amps/cabs to face each other, placed a Yamaha Pocketrak C24 between them, and set it to record in stereo. This meant that my laptop was no longer involved in the recording, and so my mind turned to video…

Whilst they played I took some photographs using an old Nikon E4600 set to its ‘continuous’ mode that, after the shutter button is pressed, takes 16 pictures that are saved as a matrix of frames in a single image file. The rate at which the 16 pictures are taken depends on light levels and other factors. Several of these were taken whilst the sound of the guitars being played was recorded. Here’s an example of the camera being moved while the frames are captured: 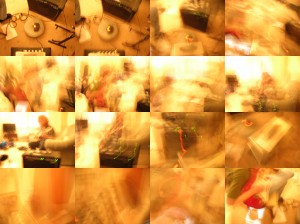 Using a utility that is a work in progress (I started programming it last week) the images can be split are recombined temporally as video… Post-production time is required for rendering this improvised (and somewhat experimental) video with its audio; anticipating that this would not happen before midnight tonight, I took a different approach to hacking a video together in (almost) real-time (only almost, because trimming the ends, and rendering it out are need).

After eating some cake, Ben and Ryan played guitar some more. Using the headphone output of the C24 as input to MaxMSP, the stereo signal was patched into my sub synth amp map patch, and I hacked together some jitter matrix manipulations to the visual output whilst recording the audio and a small section of the screen.

Here’s two minutes of the result – it’s pretty rough in more ways than one, but it’s improvised, and it’s video, and it’s newly created today: 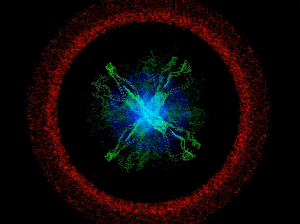