Day one for this CreativePact project (see the intro posted yesterday, and see creativepact.co.uk for other projects going on this month), and to begin this month of collecting videos of improvisation I started with some simple searches. The term ‘improv’ returns many cases of words like ‘improvement’ in the video titles, descriptions and tags; nevertheless, this video did catch my eye:

I love the way that the first part of this video is given to vocal description of the soundmaking instrument that is then played. On reflection, after viewing the next video to be discussed, this video by James Cigler can be thought of as having a certain nakedness about it: both in the way that the technologies being used are portrayed (rather than simply letting the hands be seen and the sounds they are making be heard, the performer exposes something of the underlying processes that would otherwise be unseen), and the visual aesthetic of the electronic instrument itself, which is a minimally dressed circuit board that responds to human touch, has (if not too tenuous now) a nakedness about it too.

Searching on vimeo for ‘improvisation’ – before applying any additional filters to the results – displays first the four results shown in the screenshot below: 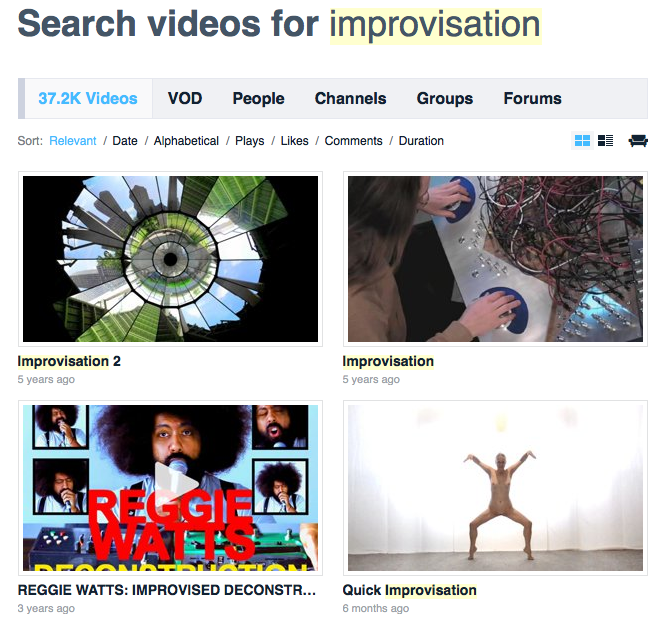 These results, for me, raise number questions and potential issues for this somewhat un-planned-out project. Even before watching them the lower two of those, in particular, had me pondering along various trains of thought… for now, let’s just think about the improvised dancing from the woman without clothing:

Quick Improvisation from Bubulcus on Vimeo.

Natasha Improvisation. Music composed by SredAn / Based on Ethiopian song.

Nakedness is no big deal, especially in the context of the arts, but it’s also something that I don’t recall ever having to think about in the context inclusive improv, but rather than explore the question here, I’ll just let you do your own thinking, and will respond to any comments below… Moving on towards choosing a video to add the inclusive improv collection today let’s think about licensing.

Whereas Quick Improvisation has a (cc) by-nc license, the Pressure Points Improv video is without creative commons licensing. Although the video can still be added to vimeo collections (an option that can be switched off by the uploader) this subtle detail of the way the video has been shared by its creator helps to simplify the task of curating…

Add to the mix of ideas today that I’d rather focus on newer content, I decided to filter the search results to show, by date, videos with a (cc) by license, and then to go with the first result in that list. So the video chosen today is:

I’m happy enough with that as a start:

Evan Parker Jams With The Reid School of Music from HSS Webteam on Vimeo.